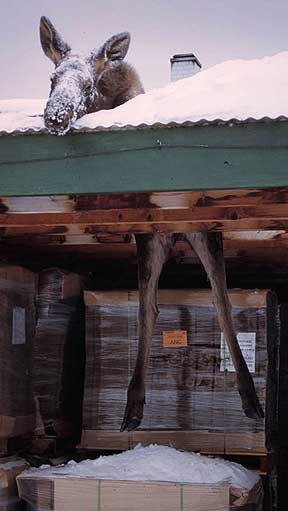 An 8-month-old moose fell through the fiberglass roof of a shed Tuesday at Bell's Nursery on DeArmoun Road. (Photo by Bob Hallinen / Anchorage Daily News)

Young cow ambles over from nearby house's deck

The 8-month-old moose crashed through the fiberglass roof of a storage shed at Bell's Nursery on DeArmoun Road and got stuck, dangling eight feet off the ground for three hours until rescuers got her down safely.

It was believed to be the first moose roof rescue in the city.

Around 9 a.m., a nursery neighbor saw the 400-pound cow walking on the deck of a house next to the shed. Then the moose stepped over a 3-foot railing and onto the shed's snowy roof.

The animal's front legs punched through the roof almost immediately, but she pulled her legs out and kept walking. Just before she reached the roof's edge, though, both back legs and one front leg punched through -- and stayed there.

The moose thrashed around, leaving a basketball-sized raw spot on her rear end, but stayed stuck, peering pathetically over the edge of the roof with legs dangling below.

Greenhouse owner Mike Mosesian got a call from a neighbor and raced over, afraid the animal was chowing on a prized fig tree inside his greenhouse. But there was no sign of a moose inside .

"All of a sudden I looked up in the air," Mosesian said. "I thought, My God, there's this moose, eight feet in the air up on the roof. That's got to be a first.' "

Sinnott arrived and tranquilized the animal, which by then was exhausted from her struggles. Mosesian called a friend with a backhoe.

The moose rescuers guided the moose's legs through the roof from below and wiggled a net beneath her. Then the backhoe operator lifted her off the roof and gently lowered her to the ground.

After the drugs wore off, the moose walked off "pretty gingerly" and headed up a snowy slope out of sight, Sinnott said. He expects she'll be fine.

Moose regularly prowl city neighborhoods for food in winter, when they lose a pound a day. Sinnott said he gets occasional reports of moose trying to reach overhanging trees on roofs, but there wasn't any food in reach on the storage shed.

"I don't know what this moose was thinking," he said. 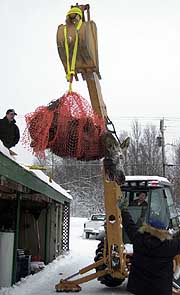 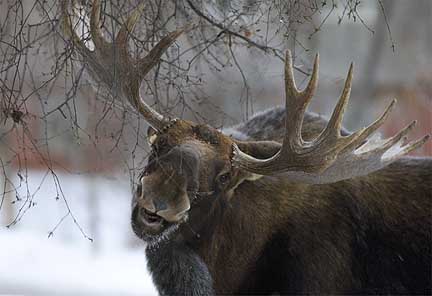